The Earth's climate has changed throughout history. Just in the last 650,000 years, there have been seven cycles of glacial advance and retreat, with the abrupt end of the last ice age about 7,000 years ago marking the beginning of the modern climate era — and of human civilization. Most of these climate changes are attributed to very small variations in Earth’s orbit that change the amount of solar energy our planet receives. 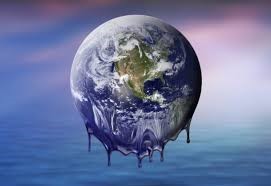 A simple definition of global warming (And yes, it's really happening.)

Global warming is the current increase in temperature of the Earth's surface (both land and water) as well as its atmosphere. Average temperatures around the world have risen by 0.75°C (1.4°F) over the last 100 years about two-thirds of this increase has occurred since 1975. In the past, when the Earth experienced increases in temperature it was the result of natural causes but today it is being caused by the accumulation of greenhouse gases in the atmosphere produced by human activities.

To put this increase in perspective it is important to understand that during the last ice age, a period of massive climate change, the average temperature change around the globe was only about 5°C. 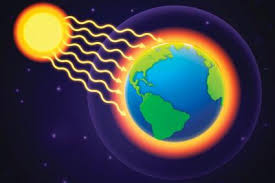 The cause of global warming is the increasing quantity of greenhouse gases in our atmosphere produced by human activities, like the burning of fossil fuels or deforestation. These activities produce large amounts of greenhouse gas. Greenhouse gases trap heat in the Earth's atmosphere to keep the planet warm enough to sustain life, this process is called the greenhouse effect. It is a natural process and without these gases, the Earth would be too cold for humans, plants and other creatures to live.

However, when abnormally high levels of these gases accumulate in the air, more heat starts getting trapped and leads to the enhancement of the greenhouse effect. Human-caused emissions have been increasing greenhouse levels which is raising worldwide temperatures and driving global warming. Most climate scientists agree the main cause of the current global warming trend is the human expansion of the "greenhouse effect".

Certain gases in the atmosphere block heat from escaping. Long-lived gases that remain semi-permanently in the atmosphere and do not respond physically or chemically to changes in temperature are described as "forcing" climate change. 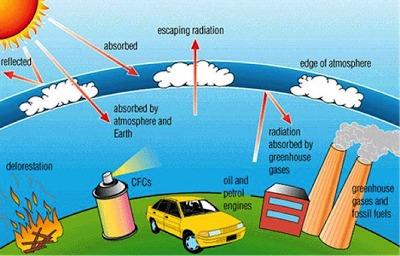 The future effects of Global warming:

A change will continue through this century and beyond

Global climate is projected to continue to change over this century and beyond. The magnitude of climate change beyond the next few decades depends primarily on the amount of heat-trapping gases emitted globally, and how sensitive the Earth’s climate is to those emissions.

Temperatures will continue to rise

Because human-induced warming is superimposed on a naturally varying climate, the temperature rise has not been, and will not be, uniform or smooth across the country or over time.

Summer temperatures are projected to continue rising, and a reduction of soil moisture, which exacerbates heat waves. By the end of this century, what have been once-in-20-year extreme heat days (one-day events) are projected to occur every two or three years over most of the nation. 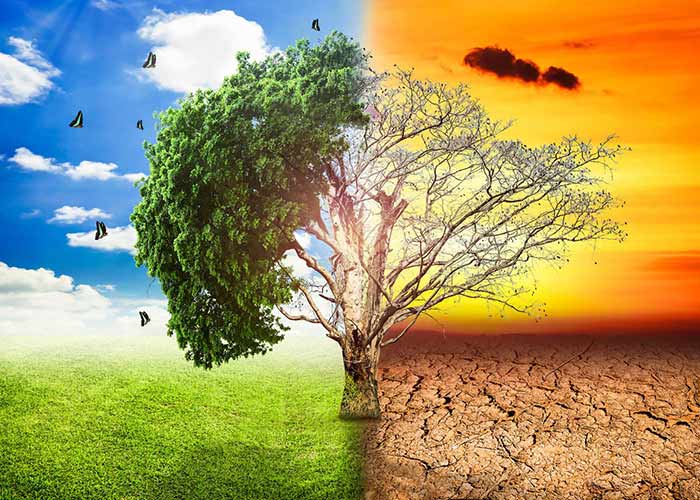 The intensity, frequency, and duration of North Atlantic hurricanes, as well as the frequency of the strongest (Category 4 and 5) hurricanes, have all increased since the early 1980s. The relative contributions of human and natural causes to these increases are still uncertain. Hurricane-associated storm intensity and rainfall rates are projected to increase as the climate continues to warm.

Increased melting of snow and ice

Around the world, snow and ice are melting at a much faster pace than in the past. This has been seen in the Alps, the Himalayas, Andes, Rockies, Alaska, and Africa but is particularly true at the Earth's poles.

Perennial ice cover in the Arctic is melting at the rate of 11.5% per decade and the thickness of the Arctic ice has decreased by 48% since the 1960s. During the past 30 years, more than a million square miles of sea ice has vanished, an area equivalent to the size of Norway, Denmark, and Sweden combined. The continent of Antarctica has been losing more than 100 cubic kilometers (24 cubic miles) of ice per year since 2002. Since 2010, the Antarctic ice melt rate has doubled.

Visit https://www.trustmedi.com/kolkata/ and Book a doctor appointment online in Kolkata for better health